Part 2 of the Making Dew in the Desert Series

Bales Hay Sales is a family-owned and operated farm in Buckeye, Arizona. The Bales family has been farming the same land since 1891.  In 2020, Trevor Bales showcased the struggles they, like many other farms, face to make high-quality hay on his Instagram account. It wasn’t long after that, that we got in touch with Trevor and arranged a demo of our all-new DewPoint 331 steamer.  At the time, Trevor was unaware that we even made a steamer for small balers.  After a successful demo and a week of running the steamers, the Bales Hay Sales organization purchased 2 brand new DewPoint 331 steamers in 2021.  Not only were the Bales first-time steamer owners, but they also received some of the first production DewPoint 331 machines ever made.

The interview in this video is a follow-up to Part 1 of the Making Dew in the Desert Series. We wanted to see if the steamers lived up to the hype, expectations, and hopes of the Brian Turner and the Bales family. In part 1 they expressed hopes to increase the quality of their hay and help them solve their labor issues. Did the first production year DewPoint 331 machines have issues? What did Brian Turner and Trevor Bales learn in order to make this whole thing work?

Improving the Quality of the Hay

One thing Brian Turner and the Bales family hoped to accomplish with the steamer was to improve the quality of their hay.  Brian explains in the video that there is around a $20 a ton difference between grades of hay, so being able to raise all or a good portion of their hay up a grade or two was one of the ways they wanted to pay for their steamer investments.  Trevor Bales determines the quality of all the hay and where to put it in the barns. Trevor explains in the video that they have very little grade 3 or 4 hay now.  It’s all 2 or better. Even the hay that got rained on was able to be turned into a leafy grade 2 hay with the steamers. 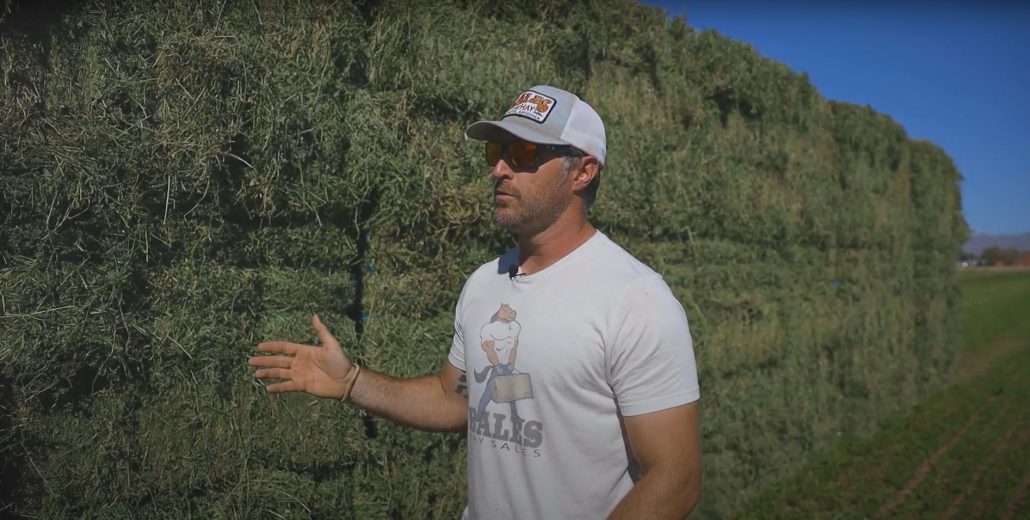 Another hope Brian and Trevor had in purchasing the steamers was to help their labor situation.  They, like many other farmers, are having a hard time finding good, competent workers.  With the steamers the Bales were able to do the majority of the baling with 2 tractor-steamer-baler setups. Before, they were running 4 baler setups.  The bales are looking to add a 3rd steamer-baler set up next year, in hopes to pick up more acreage.  The steamers did help them reduce the number of employees needed to bale each night and have a more consistent schedule for their employees. 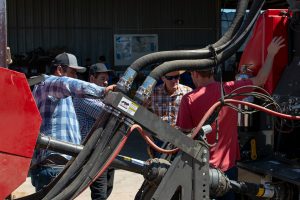 Because of the monsoon season this past year, Brian and the crew were forced to bale up until mid-day to beat the storms. In years past the hay would have been “green toothpicks”, but because of the steamers, they were still able to produce leafy, high-quality hay during the day without dew. Overall, it was a tough year with all the rain, but the steamers helped them bale longer into the day to beat the storms. Trevor explains that they were even able to turn rained-on hay into “beautiful” hay.

Problems with the New DewPoint 331’s.

Over the course of the summer, there were some minor issues with the new DewPoint 331 machines. The Bales received some of the very first production units, so some bugs and quirks were expected.  It started off with Butterflies of all things.  The large kaleidoscope of butterflies this past season were being sucked into the burner and plugging things up. they were able to rig up some screens to keep the bugs out and some sort of screening device will be implemented on future models of the steamers.  Perhaps the biggest issue the Bales experienced was the propane ignition system.  We ended up switching out all the ignition systems on all the DewPoint 331 steamers to a direct spark ignition system.  This solved the problem of the burner not lighting properly.  Although there were some issues with the Bales’ and other customers’ first year machines, we were able to resolve the problems with the help of our good dealers, and these fixes have or will be implemented on all machines going forward. 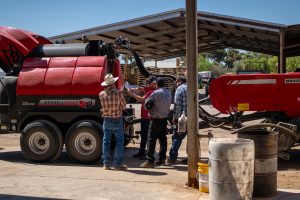 What did they Learn?

Since implementing the steamers, Brian, Trevor, and the rest Bales Hay Sales have learned what it takes to make nice hay.  When they first purchased the steamers, they also purchased 2 new IVT/CVT transmission Fendt tractors.  They highly recommend the IVT transmission tractors over the standard transmission tractors.  Being able to dial in the speed just right was very critical for Brian and Trevor when it came to making each bale of hay the proper weight.  They also learned that the employees who operated the steamers needed to care and be willing to learn the technology. The DewPoint 331 machines also changed the way they raked their hay. Since so much emphasis is put on retaining leaves during baling, they changed their raking practices to save more leaves as well. They now rake a day earlier when the hay is still a little green and soft, so they can allow the steamers to do their job and keep the leaves on during the baling process. Brian states, “It’s learning a balance between it all, but once you get it dialed in, it really makes it easier to make nice hay.”

In conclusion, we hope you will take a minute to check out Part 2 of the Making Dew in the Desert series.  Even with the crazy monsoon weather that the Bales received, it was still a successful first year with the DewPoint 331 steamers. We are excited to see a third one operating on their farm next summer. Stay tuned for more great steamer stories by subscribing to our YouTube channel!