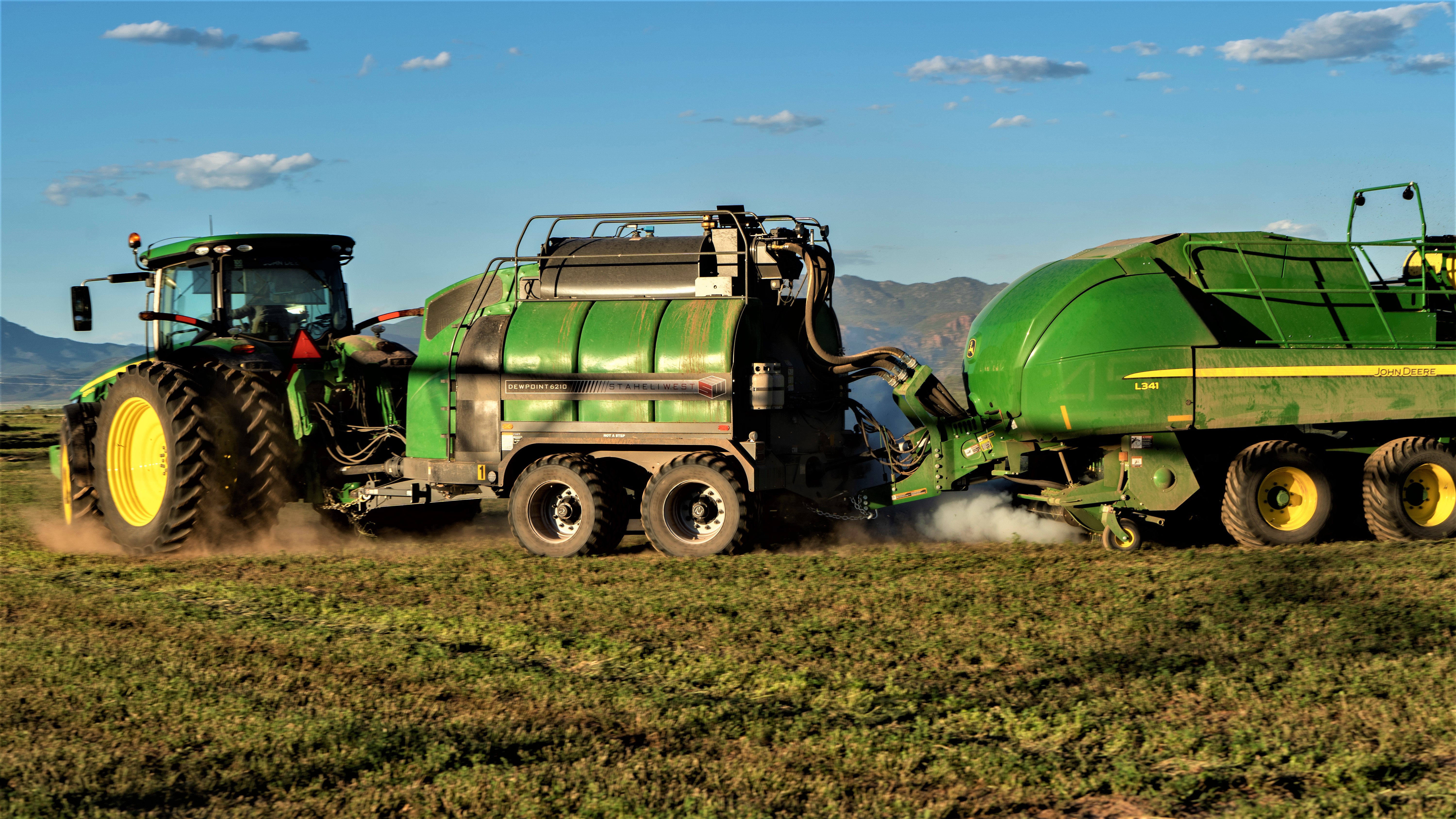 There is nothing better than receiving a perfect natural dew when baling.  However, perfect dew conditions are few and far between for many hay producers, especially in drier, arid climates.  Often the hay is either too dry or too wet and if you’re lucky, you may have a small window of opportunity when the hay is just right.  Being able to bale with steam when the hay is dry opens up the baling window and allows you to be so much more productive.  Being able to bale both day and night and make quality hay doing it isn’t the only benefit to baling with steam.  The science behind baling with steam shows why it’s so effective.

1 Gallon of Water Produces Around 1,700 Gallons of Steam

To start, let’s talk about the properties of steam.  Steam is the invisible hot gas that forms from water when it boils. The visible vapor we see is the steam beginning to condense to vapor when it contacts cooler air.  Did you know that 1 gallon of water will make approximately 1,700 gallons of steam at sea level and even more at higher elevations? This allows every leaf and stem in the crop to be treated without becoming too wet.  Combine the heat and vapor from steam, and you get a moisture medium that is optimal for penetrating the hay and softening it, similar to how a steam clothes iron is able to soften clothes and smooth out the wrinkles.

Ty Redd, Professor of Chemistry at Southern Utah University, explains that many plants will drop their leaves as a result of dry conditions to conserve water. This causes dehydration and the shutting down of biochemical pathways such as photosynthesis and carbohydrate biosynthesis. This causes plant death and the leaves fall from the plant.  The dehydrated carbohydrates in hay and other crops after they are cut and have cured have a strong attraction to water.  The water hydrogen bonds to the starch and carbohydrates.  The steam is able to penetrate into the plant to extend plant biochemistry and maintain the structural integrity of the plant.  Plants harden upon death but added water not only prolongs this effect, but it can also help break down some of the starches and structural chemicals via hydrolysis and thereby soften the total plant permanently.

One of the things that inspired Dave Staheli, founder of Staheli West, to consider steam when baling hay was his experience at a taco restaurant. He observed the workers placing cold, hard taco shells into a steamer oven and blasting each shell for a split second with steam. He noticed that the steam completely changed the pliability of the taco shells. They were soft and pliable after being steamed. Steam has a similar effect on hay.

Let’s go back to the clothes iron example. The reason ironing works to remove creases is because it loosens the ties between the long chains of molecules that are present in polymer fiber materials. The heat, combined with the weight of the ironing plate stretch the fibers in the fabric which maintains it’s new shape when cool. Some people use a spray bottle with water to loosen the intermolecular bonds in the fabric.

Steaming hay is very similar in the fact that the heat helps to soften the crop material and the water vapors help to break the intermolecular bonds in the hay. We talk more about this softening effect below. Being able to make the hay more pliable increases leaf retention, bale conformity, and appearance of the hay.

How Much Water is Added to Each Ton of Hay?

On a warm, windy day, you will likely add about 5-7 gallons of water in the form of steam to 1 ton of dry hay.  This equates to only 2-3% moisture addition by weight but this 5-7 gallons of water applied to this 1 ton of hay is converted into 8,500-12,000 gallons (or more) of steam which allows every leaf and stem in that ton of hay to be treated without becoming too wet.

Some think that the bale weight increase that comes from using steam is all water weight.  1 gallon of water weighs 8.34 lbs, so the most weight you could add in the form of water is around 58 lbs.  This is likely the same weight that would be added if you were baling with natural dew.  Many customers have increased their bale weights by 100-200 lbs per 3×4 bale.  Jeff Wood, a DewPoint owner, states, “I figure I’ve picked up at least 100-150 lbs a bale. I used to think when I first looked at it ‘well it’s all water weight,’ but it’s not. You look at the leaf in those bales and you understand exactly where it’s coming from.” 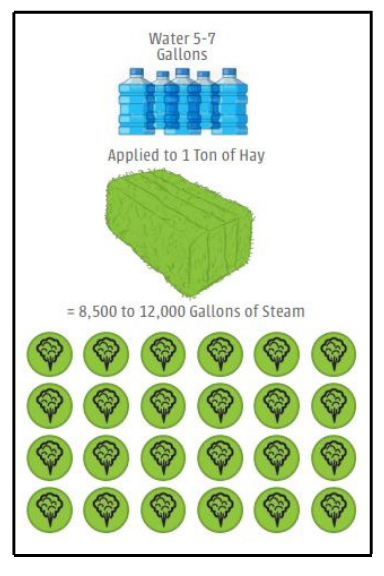