Baling Hay During the Day in High Ambient Temperatures

What Happens When Bales Become to Hot

When bales are baled too hot (135 deg. F. or above) hay will caramelize, smell like tobacco and turn brown.  Not only does the appearance of the hay decline, but so does the value and digestibility of hay.  In fact, bale heating can cause some of the protein and fibre to become less digestible.

Although hay may be baled up to 135 deg. F, hay should not be stacked when bale temperatures exceed 115 deg. F. We suggest allowing the hay to cool before stacking and storage.  Allowing hot bales to sit overnight, will decrease bale temperature, and allow the hay to be stacked and stored.  What if a rain storm is coming and we need to get our hay out of the field? Our next blog post will cover best practices and techniques to stack hay that would otherwise be considered too hot to stack.

Best Time to Bale With Steam

Although baling with steam does allow farmers to bale during the day, we still suggest that you bale during cooler hours of the day and at night if possible.  We will be the first ones to tell you that we have baled over 500 acres in one day and have ran the steamer around the clock in order to get the work done.  We have customers tell us all the time that they were able to beat a rain storm and put up quality hay with the steamer when they otherwise would have been forced to either wait and risk getting rained on or make the decision to bale dry hay in order to beat the storm.  In that sense, the steamer pays for itself over and over again.  However, if possible, using the DewPoint hay steamer during the cooler hours of the day and at night will reduce fuel and water consumption, and make an even better quality product.

Managing bale temperature is very important, especially when using steam to bale hay.  It is so important that we actually send every new machine with our custom bale temperature probe, which provides farmers with a guide to when it’s okay to bale and stack their hay. 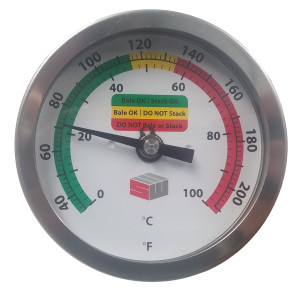